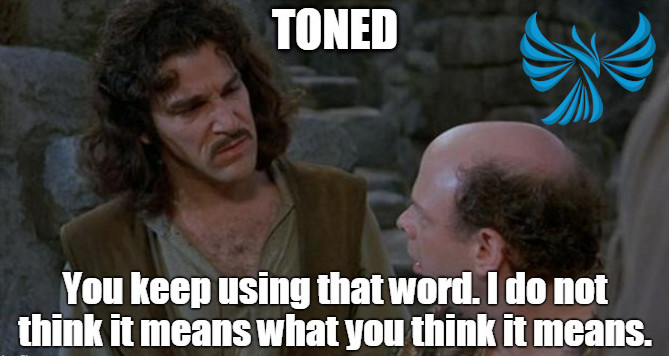 This is a post specifically for women about the unfortunate fleecing occurring daily on social media that drives them pay for ridiculous workouts, diets, and other irrelevant gimmicks in hopes of losing weight and getting toned. I have never been a fan of this terminology due to it being misleading in nature. I am fully convinced that a large percentage of women whom use that term do so arbitrarily without truly understanding what it means.

This quick video clip will help setup the rest of the discussion:

When someone says they want to tone up, what they are saying (without knowing it) is that they want to add muscle mass and decrease body fat. The many misconceptions pertaining to increasing lean mass, or God forbid the fear of getting bulky (more on this later), helped birth the safe word toned that marketing companies so dearly love.

The elliptical, stair masters and treadmills are all good methods to increase caloric expenditure (burn calories), but they won’t really shape your body in the way that you’re envisioning. Again, this isn’t completely your fault given the marketing strategies of some companies / people. At the same time, lifting 2-pound dumbbells is not going to do much for making noticeable changes in your physique either.

Thankfully, the stark divide between the side of the gym filled with barbells and weights and the side of the gym with nothing but aerobic equipment has begun to blur. The stigmas around women lifting weights has somewhat been discarded over recent years. Strength training for women is more widely accepted today, especially given all the evidence of its health benefits in addition to being optimal to shape a body as desired.

Regrettably, there is still a prevalent fear among women of getting too big if they add strength training or progressive overload measures to their regimen. The dreaded fear of getting bulky. Aside from science disproving this time and time again, in my experience getting big is not something that is easy to do. For comparison, fear of getting bulky by lifting weights is as illogical as stating I don’t want to go for a run because I fear turning into a marathon runner.

Gaining substantial muscle mass, especially to the degree of a physique competitor takes intense daily training for hours and years of meticulous nutrition habits. There are people who literally spend their entire life chasing muscle gains only to make minimal progress. Women, the only way you are going to end up bulky / big is if you consistently increase your calorie intake and are eating in a calorie surplus or if you take high amounts of exogenous testosterone. Both are completely within your control. Getting big doesn’t happen by accident.

The term toning has been bastardized by trainers. As such, marketers and sales companies play on this prevalent fear by implying that their workout will not make you bulky. By now you should know that is a deceptive practice based on a fallacy.

It bears repeating, toning is the act of simultaneously adding muscle mass and decreasing body fat.

How is this achieved?

Use of heavy weights and a well-rounded resistance training program paired with sound nutrition habits. Yes, the same prescription whether you are male or female.